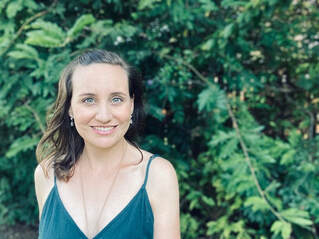 Rebecca Blair
In 2017, while trying to be present with her newborn daughter, be a great wife and manage the upkeep of their highly cluttered home, Rebecca hit rock bottom. She knew she needed SIGNIFICANT change. She discovered minimalism and turned her attention to the stuff around her. After three rounds of decluttering, she removed 70% of her stuff that added no value to her day to day life, enabling her to downsize saving her more than $120 each week.

Minimalism gave her the skills to be intentional with how she spent her time and money, and who she surrounded herself with.

Within 18 months she had shed near $500k of debt that was weighing her down.

Minimalism provided Rebecca with the mental, physical and financial space to really understand who she was - taking away all the 'noise' and to-dos.

Rebecca realised that despite all the money and time she spent growing her law enforcement and justice career, it actually made her unhappy. She no longer wanted to know all the worst parts of society, and leaned into what she was best and most passionate about - helping others.

Rebecca has since become leader of the 700 member Minimalist.org: Brisbane Local Meetup Group, started her business as a Career Change Coach for First Responders, and is in the process of finishing her book on minimalism - a guide to support and inspire families to simplify their homes, finances and schedules so they can too create a life that aligns with their values.

Other Information Discussed on this Episode:
*affiliate link, you are under no obligation to use it but I'll get a few cents if you do, thank you either way!
Rebecca's Written Responses to the Questions I sent her (please forgive any typos).

Hi, I’m Rebecca from Queensland, Australia.
I am ex-lawyer turned Career Coach, I am an ex-consumptionist turned minimalist.
I am a mum, a Career Coach for Men and the leader of the Brisbane Minimalists.Org Group.

What made you decide to become a minimalist or move toward minimalism?
When my daughter was a newborn, I had unintentionally experimented with how clutter can be terrible for your mental health. We moved interstate, downsizing our home just before my daughter was born, but we didn’t downsize our stuff.
Our home became a pressure cooker, I wasn’t sleeping because our daughter barely slept and when she did sleep I felt intense pressure to try and clean and tidy the house.
On top of this, I realised we were burning through our savings by still living like we were double income no kids. This meant it was looking like I would have to go back to work early and I was on maternity leave from a job within the police. I had been diagnosed with PTSD while in this job so this was not a good option for my mental wellbeing or our family..
The realisation that I might have to go back to work early, because I was buying stuff I didn’t need or care about was a huge smack in the face.
I knew things absolutely had to change. I started learning about how to manage our money,  and began strategically paying off our debt. When I started we were near $500,000 in debt. I also found minimalism at a similar time, and really started questioning what was within our home.
I joined our local Minimalists.org group and connected with a lot of people also living a similar lifestyle. 18 months later I became the leader of the group and I’m now into my second year.

What has it done for you? how has your life changed because of it?
The more debt I cleared and the more stuff I removed, I felt lighter and freer and my mental wellbeing improved and it’s the best it’s ever been.
Then I began to be more intentional in every aspect of my life. Intentional about who I surrounded myself with, what I was eating, what I was thinking and where I was focusing.
Being intentional with our money has allowed our wealth to grow significantly, and this has allowed us the freedom to redesign how we want to live.
Because of Minimalism, I had the space to study and became a qualified career coach. I now work with men in industries of high stress and high suicide rates to transition out of their careers and into roles that support their wellbeing and align with their interests. This work is so incredibly needed and I just love what I do.
It’s also changed my husband’s life. He has had the time to embrace his love of writing, and has now published two post-apocalyptic fiction novels.

Where do you see yourself in the future in regards to minimalism and “stuff"
Because minimalism focuses on what adds value to your life, minimalism will continue to evolve with me. I am very clear of my values, and continue to assess my life against those.
My goal is to grow my business so that the profits are invested into rehabilitating barren land. This is the legacy I want to leave behind.

What responses do you get from other people when they find out?
A lot of people completely misunderstand minimalism. It isn’t about white walls and no furniture. It isn’t about deprivation. It’s about intentionality. Being really intentional with each aspect of your life and assessing whether or not things and people really add value.

What would you tell others who aspire to…
I would tell them that who you surround yourself by is really important.
I call my friends and my minimalist group, my expanders.
When I was first starting out as a minimalist, the local minimalist group showed me there is a very different way of doing things. They opened up the realm of possibilities for me.
They were:
People who don’t own a house and house sit
People who don’t work in a 9-5, and have their own business
People who have zero debt.
My advice to others is to intentionally surround yourself with people who are walking their own path. They allow you to see that you can define your life however you choose. They will also be the ones there supporting you.
Anything else you want to tell people?
Really get to know yourself. Pay attention to what brings you happiness, what energises you, what makes you feel free both in the short term and the long term. Prioritise your attention and money in those directions.

If you could give your 10 year old child self 1 piece of advice NOW, what would it be?
Find a mentor. Someone who can help you understand who you actually are and encourage you to be that person.
I felt I was really given a certain pathway to follow in life, and I hear this often from my clients as well.
I got great high school results, so I was channelled into studying law., I went into the public sector because that’s what people in my city did. I had the impressive career. I built the big house with my husband and had new cars and expensive toys. I followed the script. It didn’t bring me happiness and I completely lost who I was. Then I got rid of it all, and actually found what I valued and built my life around that.

Thank you Rebecca!
Want to make my day? Please review the AUA Podcast or share it with a friend!

Thank you so much for being here 🥰​
​KA
Here are the AUA podcast links:
Apple
Overcast (this is my preferred player)
Spotify
​Google
Podbean
You can find all the show-notes here!
x

This is where you'll be notified of some bloggings, podcast episodes and my upcoming classes at discounted prices!